“The alien in our midst …” slideshow Yes, it’s true. Maybe you couldn’t get in to Gaffa Gallery to see my latest show, so here it is. I’ll be showing some recent work, along with my partner in life and art Christopher Lawrie, at the upcoming Head On Photo Festival. The show – called “The alien in our midst … “ – opens on May 17 at Gaffa Gallery in Sydney.
Check out all the events coming up for the festival, which showcases work from many Australian artistic and commercial photographers.

I am happy to announce that my work Tree of Knowledge from the History Trees series is selected for the 2011 Blake Prize Directors’ Cut Online Exhibition, and you don’t have to go anywhere to see it 🙂 Visit http://www.blakeprize.com.au/galleries/directors-cut?yr=2011&page=6 and scroll down to: Tree of Knowledge (exploration/orroroo).
Some of the other works are interesting too.
It will be online until the end of January. This series is based on photos taken in northern SA (around Maree-Lake Eyre) in 2011, and on the history of the Afghan cameleers who were pioneers in this area. See below for an english version of all the text on the images. Little Asia (Leigh Creek)
Marree, with its high concentration of Afghans, was soon referred to as Little Asia. It also became the centre for inland transport with camel strings leaving regularly for the Birdsville, Oodnadatta and Strzelecki tracks, Broken Hill, the Northern Territory and the Western Australian gold fields. They often suffered from racial prejudice as a result of their religion, culture or the economic competition they provided for a declining number of jobs.

Ghan Town (Farina/Maree)
Wherever these Afghan cameleers settled, they lived in a separate part of town. Consequently many inland towns had three distinct sections, one for the Europeans, one for the Aborigines and a third section for the Afghans. Their areas became known as Afghan or Ghan Town. There was contact between the Aboriginal and Afghan groups but almost no contact between the Europeans and these two groups. Examples of this are well illustrated in Farina and Marree where even the cemeteries are divided along these lines.

The alien in our midst (Lake Eyre)
“Within the high tin walls of the Afghan camps in all towns of the north line, white women are living, the only ones in Australia who have blended to any extent with the alien in our midst. Renouncing the association of the women of their own race, they have forsaken their own religion for the teachings of the Prophet and the life of the cities for the desert trail. Several of these have made the pilgrimage to Mecca.” Ernestine Hil, 1933.

Shot in a mosque (Lake Eyre)
Many of these Afghans did extremely well in their chosen business. Abdul Wade had four hundred camels and sixty men working for him. Fusli Ahmed worked the Port Augusta – Oodnadatta line for many years before moving to Broken Hill. Faiz Mahomet, who arrived at the age of 22, settled in Marree where he operated as a Forwarding Agent and General Carrier. In 1892 he moved to Western Australia and worked from the Coolgardie gold fields with his brother Taj Mahomet. On 10 January 1896, while Faiz Mahomet was at the Murchison gold field, Taj Mahomet was shot in the Coolgardie mosque by Gulam Mahomet. The case was reported in most newspapers both in Western Australia and South Australia. The Express and Telegraph called it ‘Cold-Blooded Murder, Shot in a Mosque, Killed Whilst at Prayers’.

They became a pest (Farina/Lake Eyre)
In 1880 Sub Inspector B.C. Besley suggested that the police in the north should use camels for the collection of statistics and census forms. His suggestion was taken up and camels were from then on used by all police in the north for all kinds of work. The Marree police used camels to patrol the outback until 1949. When the camels, who were brought here because they could carry loads of up to 600 pounds over long distances with little food or water over almost any terrain, had outlived their usefulness, they became a pest. Most were shot when found on common land or without a registration disk. In this way hundreds were shot by the police to the delight of the pastoralists.

Live as they had always done (Lake Eyre)
Each Afghan community had its own leader. In Oodnadatta it was Abdul Kadir and in Marree it was Bejah Dervish. Bejah, decorated for his military service, came from Baluchistan and later took part in the Calvert Expedition of 1896. In these communities the Afghans continued to live as they had always done, following the Muslim religion and customs. Most Afghans who came to Australia were single or if married left their wives behind as they expected to return wealthy in the not too distant future. Many remained single but others married Aboriginal women. Very few married white women.

The History tree series combines portraits of aged eucalypts with vintage book pages representing historical interpretations of Australia and its culture. Many ancient trees have been commercially exploited for the manufacture of paper for books and other transient goods; those surviving remain as scarred reminders of a pillaged landscape. 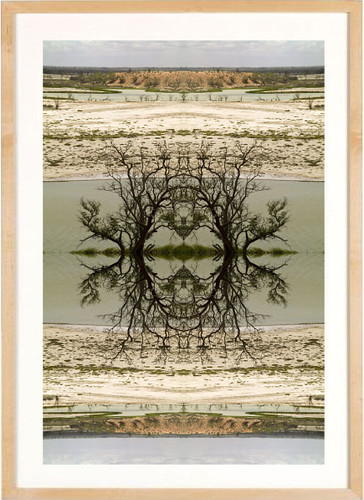 If you are in Sydney in January, please check out my upcoming exhibition:
“Too much ask …” Murray River 2010

For more, download the artist statement, go to the “Too much ask …” slideshow or the gallery photoset. A memento of the Australian federal election, 2010.

Murrumbidgee junction – Too much ask